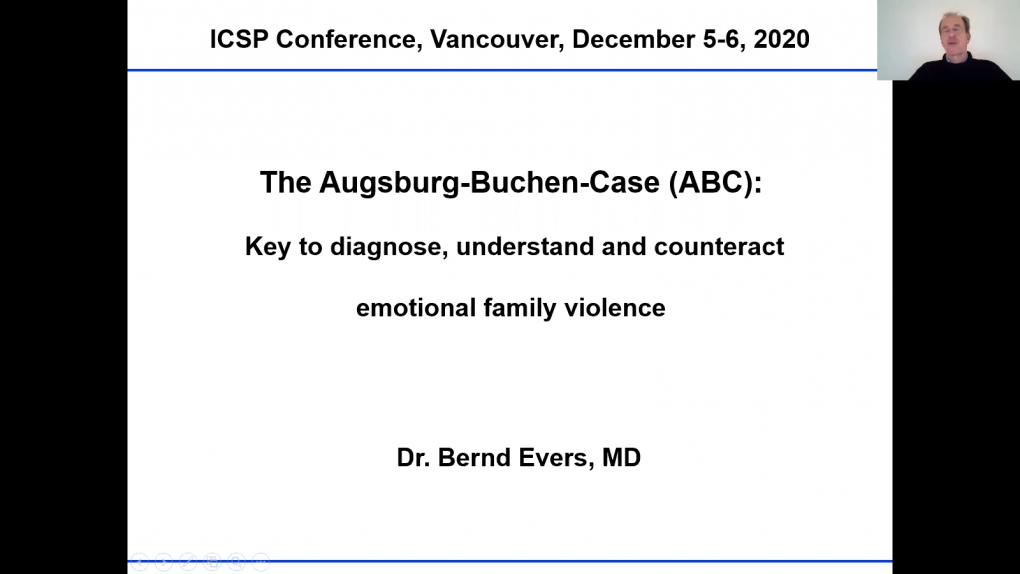 Dr. Evers is a German board certified General and Orthopaedic Trauma Surgeon with more than 20 years of national and international experience as clinician, researcher, lecturer, and author with main focus on trauma. During the last decade, he primarily focused on strategic medical advising in conflict prevention and resolution within the area of NATO and EU. Since 2018 Dr. Evers centered his activities on research and score development in the field of child protection and abuse also starting to act as guardian ad litem and advisor in family court proceedings.

Relevance of the Topic – Current Situation – Challenge – Purpose of the Study: As consequence of separation and divorce, the annual rate of affected children in Germany is calculated as to be as high as 160.000-200.000. Various German and international studies revealed a percentage of up to 70%, in which children lost one parent either substantially or totally, associated with a significant psychosomatic morbidity rate comparable with the one after death of a parent, most recently been reported by Meland et al. (2019). As of now, all over Germany a very heterogeneous procedure after separation and divorce concerning all involved actors led to very heterogeneous outcomes especially with focus on the children´s way ahead, while the role of emotional family violence has only sporadically been investigated. Therefore, the purpose of the presented case study has been to prospectively observe and analyze a couple`s separation and divorce particularly focusing on the well-being of the two involved elementary school-aged children. The case of highly different co-operating parents developed from a ready-to-go equiparental model situation into a move-away of the non-cooperating parent (nc-p) and subsequent disruption of both children out of their well-established center of life (provided by the cp) to an austere farm more than 250km part from one of the other days. Objective of the study was 1) to analyze the root causes of such a children`s disruption course, dominated by emotional child abuse focusing on the role and behavior of a) both parents as well as b) all involved professional key actors and develop necessary ways-out and 2) to apply and test an innovative semiqualitative scoring system for supporting the assessment of the actors and their interdependencies to ease the understanding of the situation and support the decision making process with special emphasis on emotional family violence.   Material/Methods: The case study has been started in 2016 and has now been conducted for 43 months, including two different local systems in Augsburg and Buchen (pre and post move-away). Throughout this period the following aspects were monitored and analyzed: Role and behavior of parents (cp:co-operating parent versus n-cp: non-cooperating parent) in terms of willingness and capability to co-operate to find children-needs-based solutions as well as key aspects such as ability to foster the children`s development, children-parents relation, continuity and binding tolerance. Furthermore, the biographies of both parents were analyzed in terms of own experience and exposure to emotional and physical family violence. Role, behavior and focus of interest of key professional actors (both parties` lawyers, judges including district court und higher regional court, family consulting institutions as well as youth welfare office representatives, guardian ad litem, teachers etc.) in terms of competence (profession-focused knowledge with special focus on family violence, experience), engagement, availability, children focus, personal biographic background, conflict of interest (monetary or role-specific), communication style and willingness to come up with agreements and children-focused solutions. Furthermore, a rough multilateral cost calculation has been undertaken to illustrate the financial flow between the main actors. Results: The root cause of the escalating development from a ready-to-go for equiparental children`s care case to a move-away of the n-cp associated with the immediate disruption of the children out of their center of daily life with subsequent complete alienation of one and partial alienation of the other child can be clearly seen as a result of a complex-orchestrated combined behavior of all key actors. Key factors of the deterioration of the situation was a constant process of emotional family violence applied by the n-cp, based on a triad of blocking behaviour in terms of co-operation at the parent level, isolated decision of the n-cp in important decisions about the children without information to the cp and constant defamation of the cp along with constant manipulation of both kids covering the whole spectrum of emotional family violence including subtotal alienation of both kids. Further factors of relevance were constant fueling of the conflict by at least one lawyer, lacking competence, capability and willingness of the consulting actors as well as the youth welfare office representatives, significant conflict of interests and bias of the guardian ad litem, a decision of the local and the higher court neither applying the current national and international laws nor the well-established current scientific knowledge on children`s well-being, especially ignoring all signs of constant emotional family violence. The n-cp`s biography revealed a long history of emotional family violence. Significant interdependencies as well as total lacking transparency and control from outside significantly contributed to this unique escalating development. Some actors such as the n-cp and the guardian ad litem significantly benefitted from this development financially. The most striking take-away however was, that children`s support and protection was not available at any phase of the process at all.